Travels in the Northeast

We've been off on a vacation. Since the plan is to retire to CA next year, DH and I figure we'd better see everything we want to see on the east coast while we can. This summer's plan has been a trip up through Maine, into Canada to Prince Edward Island and back through Maine, VT, and NY to the Adirondacks. We're currently in Augusta, ME on the way to VT. DH wanted a stop at the Maine State Archives and Library to do genealogy research. Thus.....I am able to access my computer with their free WiFi. 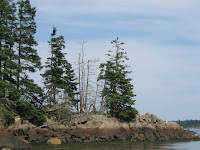 The trip has been truly wonderful. We had a great two nights on the island of Vinalhaven in Maine, where our dear friends own a house. Here's a picture of a typical scene when boating through the islands of Maine. 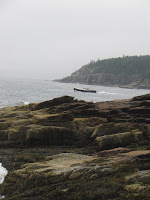 We traveled up to Bar Harbor and spent a glorious day at Acadia National Park. We stayed at the greatest B&B called the Birches. It was in Southwest Harbor. Our hosts Dick and Rocky Homer were delightful. The view from our bedroom window was the bay. Here is a scene from Bar Harbor.

And then it was off to Canada. We took the CAT ferry to Yarmouth, NS, Canada. Unfortunately, I found out I was not a seasoned boater. I had to stay put and look at the horizon in order to avoid being sick. We drove up the eastern shore of NS to Truro where we spent the night. In the morning, we boarded the ferry for PEI.
PEI is a beautiful place, full of lighthouses, bays, farms, and gentle rolling hills. We stayed at Anglo Rustico at another B&B on the water. Our hosts were a lovely Acadian couple who reccommended a side trip to Greenwich Dunes. It was well worth the drive despite the horrendous heat and humidity......PEI was having an unusual heat spell. On Saturday, we attended the "Anne of Green Gables" musical in Charlottetown. PEI is the setting for the classic L.M. Montgomery stories. Here are some pictu 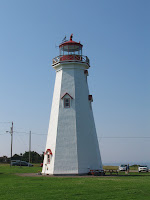 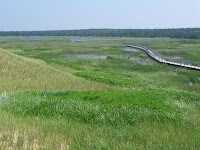 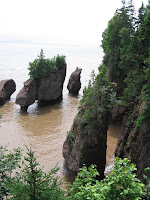 Now we are back in the U.S. having stayed one night in New Brunswick where we saw the Reversing Falls and the Hopewell Rocks. Here is a picture of the interesting rock formations at Hopewell Rocks. When the tide goes out, you can walk out to them. You can really see the effects of the wind and see on the red sandstone.

So now we are in Maine (one of my very favorite states) and my story ends for now. It's been a great trip. I feel so truly blessed to be able to travel and see so many lovely places.

Posted by Leslie at 7:31 AM No comments: