It's been 7 weeks since the accident and I can walk without the aid of a walker or a cane. I'm still slow and my right leg still fatigues easily and hurts and throbs off and on. I'm expecting that the next x-ray will show that the fractures have pretty much healed. Now if the pain would just go away.........this is definitely a test of patience.

The third week of January I went to a quilt retreat sponsored by my local guild, Friendship Star Quilters. It was held about 45 minutes away at a religious retreat center. I didn't have the energy to bring my machine so I just took along some hand-work projects. 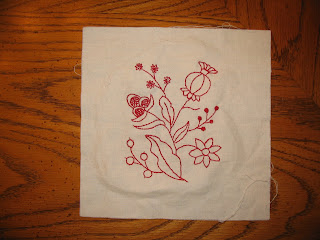 This is the redwork square that I began at the retreat and finished at home. I found that I liked doing this.....very relaxing and easy. I also tried a little needle-turn applique heart but I don't think that needle-turn is for me. My fingers felt all out of sorts and I couldn't seem to get any rhythm going. 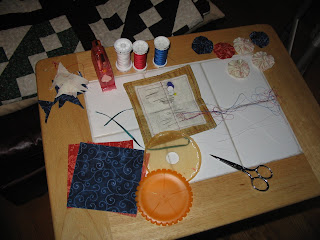 I also took along a Yo-Yo project. Basically, I discovered that making Yo-Yo's is boring. Maybe if I had some real project in mind, I might like it better. I finished about 20 Yo-Yo's and I have no clue what I'll do with them. Something to add to the UFO basket. 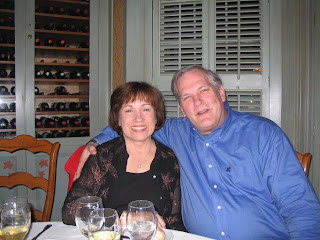 The most exciting thing to happen in January for us was DH's retirement after 38 years at the same company. His department held a very nice dinner at a French Restaurant to celebrate. It will be some adjusting to being home together 24/7 but we are looking forward to travel and projects together. The first BIG project will be the move to California. The accident has put a slight damper on that but the goal is still to move in 2008. 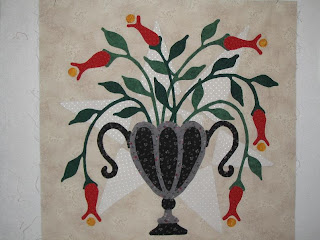 And finally..............My January BOM for thequiltshow.com. I'm not sure what inspired me to even start such an ambitious project. At heart, I am not an appliquer so I am using raw-edge fused applique. It won't be as pretty as all those patiently needle-turned blocks but I'll enjoy it just the same. Having the encouragement of an on-line community of quilters definitely helps keep one motivated.

Posted by Leslie at 3:30 PM No comments: