A Little Something I Am Working On

I attend a small group through my quilt guild, Amador Valley Quilters.  We are called Quiltinators  and we are a drop-in group that works primarily on projects for the guild's Community Quilts Projects.  But because we are quilters, we occasionally offer a challenge.  I put one up last summer that is due at the February meeting. We all brought a yard of  a fabric from our stash that we considered ugly or undesireable.  We stood around in a circle and began by tearing the initial fabric in half, dropping a half in a paper bag and then passing (musical chair style) the remaining half.  When the signal was given, we stopped, tore fabric in half again, dropped one piece in the bag, and began passing again.  We did this until we got to 1/16th yards.  The challenge was to go home with your "6 Easy Pieces" and make something.  Everyone is required to take a before picture of their pieces.  Here are mine:

So I let the bag sit and marinate for quite a while.  Ideas came and went.  I made one small set of flying geese and then we went on our trip to Portugal in October.  If anyone reading this, reads my blog you will know that I came home with a broken wrist.

I went around moaning and groaning while in the cast because I couldn't sew.  I announced to the group that my project wouldn't get done.  I threw myself a pity party.  And then.......the cast came off and after my exercises began I discovered that with patience, lots of patience, I could sew on the sewing machine.  Then I discovered if I used a sharp blade and only worked with one or two layers of fabric, I could cut with a rotary cutter.  The trick was to work on the project in small increments of time so as to not totally fatigue my wrist and arm.

The due date is February 4 and I just might have this little challenge piece done.  But I'm not going to post a complete picture until after the reveal.

I am trying out various names......"6 Easy Geeses" or "Frog, Frog, Goose" are the leading contenders.
Posted by Leslie at 6:02 PM No comments:

Since blogs are often recordings of personal journeys, I find myself reflecting and writing about my hand journey since the "fall down the grand staircase" in the monastery in Portugal.  At this point, it has been  2 1/2 months since the surgery and 3 1/2 weeks out of a cast.  Going to hand therapy has become a weekly event where they push, pull, twist, and tell me to go further.  Their motto (and now mine) is "no pain, no gain".  The swelling is down considerably but definitely not gone which is one reason the pain continues.  The pain meds and ice and warm paraffin are my friends.  I can type for a little while, sew for a little while on the sewing machine but still no driving.  I'm cooking some with Jim's help to cut and chop and move large pans around. I'm taking a walk everyday that I can when it is not raining.  It is good for my well-being and for my soul. Recovery of range of motion is my full-time job.  I praise God for the progress that I have made.

Posted by Leslie at 8:58 PM No comments:

With some success I can type with two hands now but my hands fatigue easily.  I figured if I could type, then I could probably use the sewing machine.  Again, I have to set limits so my hands and wrist don't get too fatigued......but I can sew a straight line.  I pulled out some pre-cut 5" squares and had a go at it. 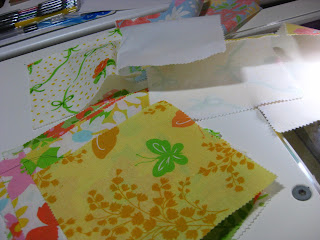 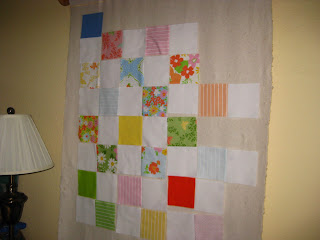 Unfortunately, I can't even envision using a rotary cutter so how am I going to square anything up?  The pile of UFO sections will go on I'm sure for several months.

I've also discovered the secret to scar softening.....cocoa butter during the day and Eucerin cream at night.  I don't expect the scars from the pin removal to completely go away but softening them helps aid in wrist movement. 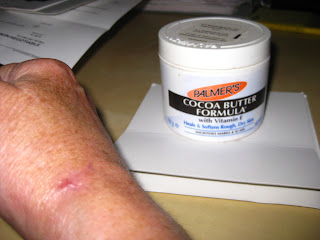 Three weeks out of the cast, two weeks so far of hand therapy.  We are working first on the fingers in order to remind them of their grabbing, pinching, holding, writing function.  It's slow but steady and each day seems to see a little progress.  Does it hurt? Yep.  I'm trying to push through it.

Posted by Leslie at 8:55 PM No comments:

A New Year Once Again

Past Year (not necessarily in order) - trips to new places, grand-daughter fun, bathroom remodel beginnings, remembering and celebrating loved ones, bike riding, new responsibilities, model at PIQF, R2CA with friend, evaluation of goals and activities, sewing and quilting,  volunteering at EBI, end of the year slow-down with a broken wrist.

This Year - go forward with the bathroom remodel, regain as much range of motion and strength as possible in my right wrist and hand, grand-daughter fun, celebrate my loved ones, grow in knowledge and faith, back to sewing and quilting, take time off from responsibilities, make new friends, back to volunteering at EBI